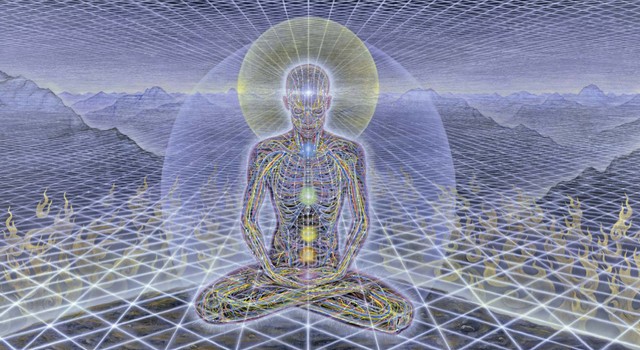 Alex Grey is now considered by many to be the most important cultural icon for a new generation of spiritually, socially and ecologically attuned art and music lovers. Thousands of enthusiastic fans flock to meet him wherever he goes.

Alex and Allyson have collaborated on performance art, live-painting on stage throughout the world, and the “social sculpture” called CoSM, Chapel of Sacred Mirrors, that the Grey’s cofounded in 1996. The Grey’s live at CoSM in Wappinger, New York and in Brooklyn since 1984. Their daughter, Zena Grey, born in 1988, is an accomplished actress and artist living in Los Angeles.

Alex Grey is best known for his paintings that portray multiple dimensions of reality, interweaving biological anatomy with psychic and spiritual energies. Grey’s visual meditation on the nature of life and consciousness, the subject of his art, is contained in five books. His two monographs, Sacred Mirrors and Transfigurations, follow the history of Grey’s artistic life. The Mission of Art and Art Psalms reflect on art as a spiritual practice. The book, CoSM, co-authored with Allyson Grey, provides a guided tour of the New York City installation of the Sacred Mirrors collection. Grey’s world-renowned career includes exhibitions and keynote addresses from Basel to Tokyo to Sao Paulo, and features on the Discovery Channel, the CBC, in Newsweek and Time magazines.  Grey’s art has been used on albums for the multi-platinum bands Nirvana, Beastie Boys, Tool, and String Cheese Incident.  A five-year installation of Grey’s best loved artworks were exhibited at the Chapel of Sacred Mirrors, CoSM, in New York City from 2004-2009.

Born in 1952, Allyson has been a partner to Alex Grey since 1975. She paints and collaborates with her husband, the internationally acclaimed artist, Alex Grey, and the film actress daughter, Zena Grey. Compelled to create spiritual art since her spiritual opening on LSD in 1970, Allyson has been attracted to abstraction and an untranslatable symbol system of sacred language. Sacred writing of all faiths, however come into conflict through human interpretation as the written word defines the differences of philosophy and traditions, when truly the basis of all religion is unity and infinite love.